ARGH. Work life has been UNBELIEVABLY busy. With the exception of a quick weekend trip to Las Vegas recently, in the past 2-3 weeks, I’ve spent at least 90% of all waking hours working. I wish I was joking.

The last of the theme parks we visited was the Magic Kingdom. We spent 2 days touring the park, 11/29 and 12/6, and 1 night attending Mickey’s Very Merry Christmas Party on 11/30.

If you’ve been to Disneyland, then the Magic Kingdom will be familiar to you. It’s just that nothing is in the “right” place (I kept wanting to go in specific directions because “that’s where it is at Disneyland”) and everything is bigger (just look at how HUGE Cinderella’s Castle is compared to Sleeping Beauty’s Castle at Disneyland). It’s like the most bizarre feeling of “déjà vu.” 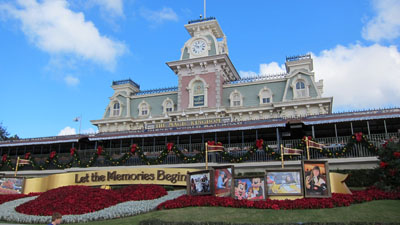 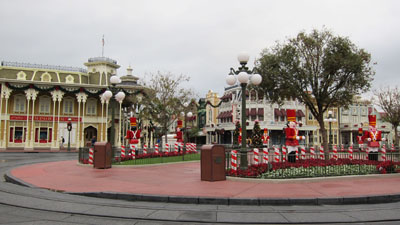 On our first Magic Kingdom day, I made reservations for breakfast so we could get into the park earlier than the general public. I wanted to get photos of the park without the crowds! This was before they installed the enormous Christmas tree in Town Square. So empty! 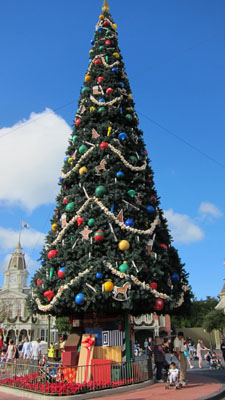 For the record, here’s the Christmas tree a few days later. 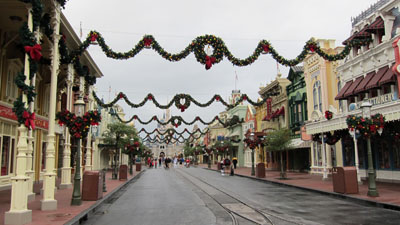 Back to the empty park. And the first glimpse of Cinderella’s Castle! 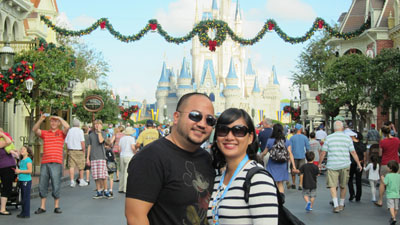 Getting closer to the castle. I love it! 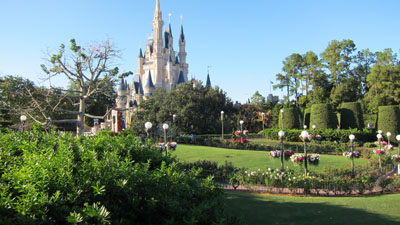 GORGEOUS. I absolutely loved the gardens surrounding the castle.

For the most part, all the rides and attractions are similar to those at Disneyland with just a few exceptions —

Space Mountain never had more than a 5-10 minute wait. UNHEARD OF AT DISNEYLAND.

Buzz Lightyear’s Space Ranger Spin is normally a favorite but OMG, it was such a disappointment at WDW. The guns are attached to the ride vehicle and you can’t move them around. GAH. 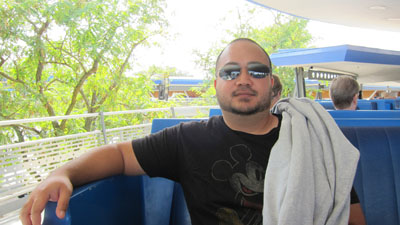 There’s no Indiana Jones ride but there is the Tomorrowland Transit Authority PeopleMover! 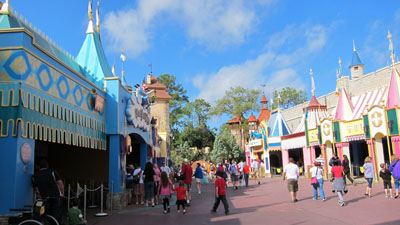 Fantasyland is one of the areas that looks completely different. I didn’t care for the exterior facades. I mean, It’s A Small World is indoors (on the right side of the picture above)! It kinda loses its grandeur. 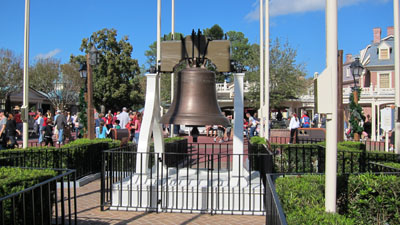 And there’s a Liberty Square (so patriotic) instead of New Orleans Square. 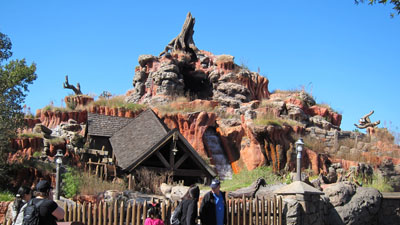 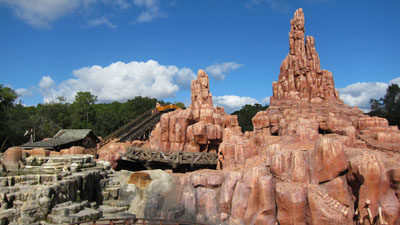 But Splash Mountain and Big Thunder Mountain are the same.

One of the things I really wanted to do was dine at Cinderella’s Royal Table inside the castle. It’s a character meal but I dragged Rob to it anyway. Hehe. 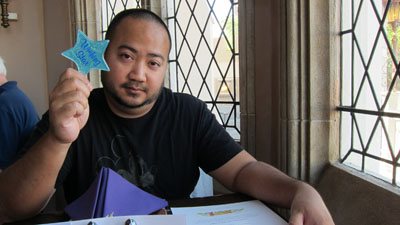 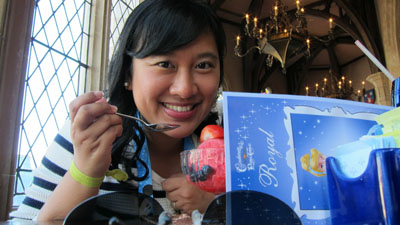 We were seated at a great table by the window overlooking Fantasyland. The meal was nothing special and it can be awkward meeting the princesses as an adult (LOL) but I enjoyed the novelty of the experience. They even gave us toys that you’ll see in an upcoming picture. 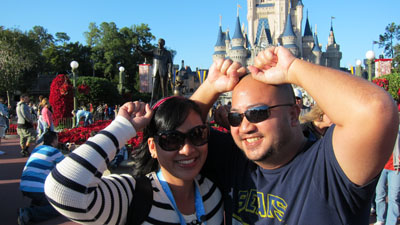 The photographer wanted us to make Mickey Mouse ears. Can you even tell that’s what we’re doing?! 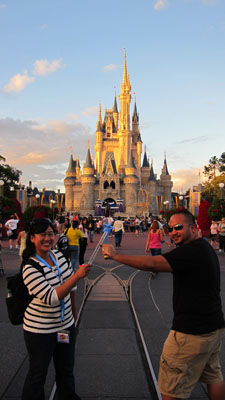 Here are those toys we got at Cinderella’s Royal Table — a sword for Rob and a wand for me. No, we weren’t carrying them around the park (I’m not THAT silly) but we thought it would be funny to bust them out for a quick shot. BWAHAHAHA.

Right around sunset during the holidays, the castle is lit up in a cute stage show called Cinderella’s Holiday Wish. 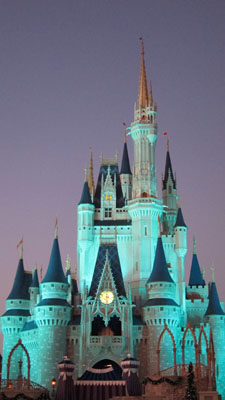 Waiting for the show to start… 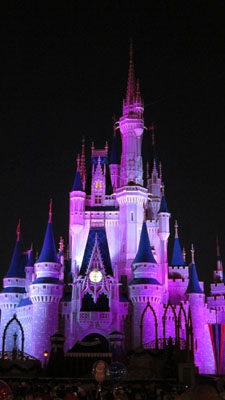 Love how the castle changes colors. 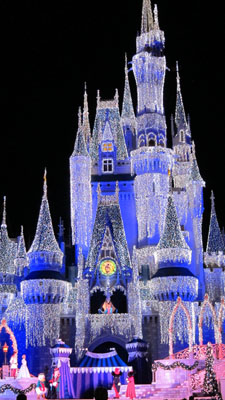 And here it is after Cinderella’s wish comes true! 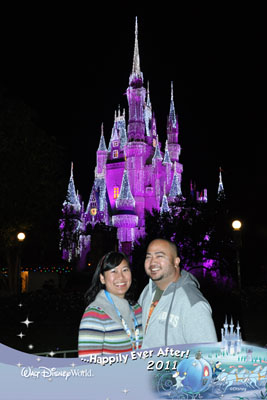 Despite having 2 days dedicated to the Magic Kingdom, I also wanted to attend Mickey’s Very Merry Christmas Party one night. This is a hard-ticketed event and features special holiday entertainment… 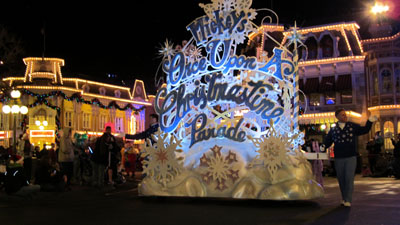 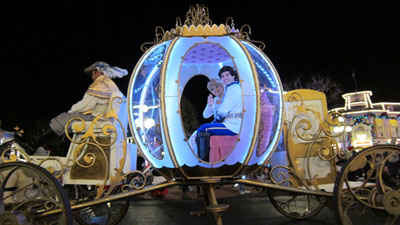 They’re looking right at me! 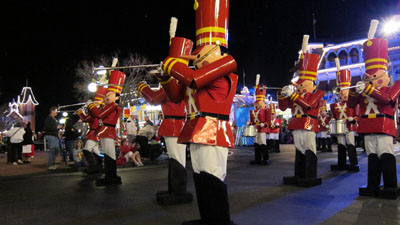 The toy soldiers are my absolute favorite.

There’s also no shortage of characters to meet… 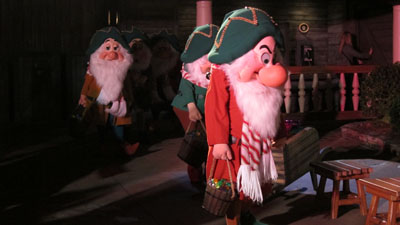 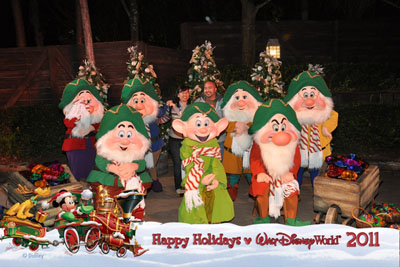 They only appear together at the Christmas party so I didn’t want to miss the chance to get a picture with them. And yes, that meant waiting in line for an hour. 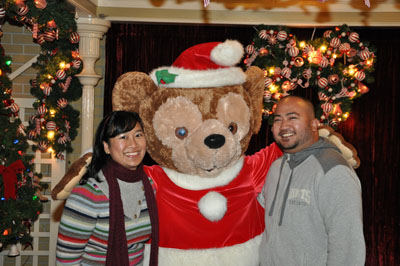 I think Duffy is adorable. 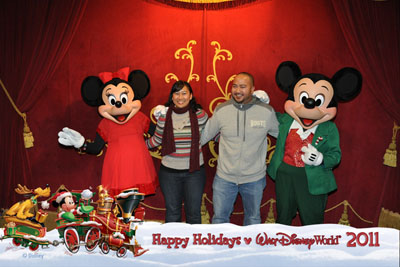 And of course we had to meet our hosts for the evening — Mickey & Minnie Mouse.

We had a magical time!

For more pics from our time at the Magic Kingdom, check our Flickr —
Day 1
Day 2
Mickey’s Very Merry Christmas Party