Ugh, daylight savings time. I don’t know why springing forward one hour affects me the rest of the week afterwards. I’m finally getting back to normal after a week of lack of sleep. And now my spring allergies have caught up with me. BLAH.

BUT the new Justin Timberlake album was released yesterday! WOOT. I downloaded it right away and currently have it on repeat. My favorite song at the moment is “Pusher Love Girl.” It’s AWESOME!

So in my last entry I revisited the time we spent at Tokyo Disneyland — and now we’re going to Tokyo DisneySea!

Thursday, 11/15 & Friday, 11/16
WOW is all I can say. DisneySea is the most picturesque theme park! It’s a real treat for the eyes at every turn and it quickly catapulted itself to my second favorite Disney park (after the original Disneyland of course).

The iconic Aquasphere is the centerpiece of the entrance plaza. It was so exciting to be here!

The park has a nautical theme and consists of seven different lands or “ports of call.” There is so much to explore at each of them — we spent 1.5 days at the park and didn’t get to see and experience everything (good excuse to go back :)). I don’t know that my photos can truly show how amazing the park is but I’ll try! Let’s start with…

Mediterranean Harbor! This is the entrance land and resembles an Italian port city.

First view of Mount Prometheus (the park’s iconic volcano) as you enter.

We decided to head right to explore the park counterclockwise (and avoid the huge crowd headed in the other direction – I’ll explain later).

The view above is taken looking back at Mediterranean Harbor from across the water.

Walking to the right brought us to Mysterious Island, which is located within Mount Prometheus and features a Jules Verne theme.

GUH. The detail is seriously jaw-dropping.

One of the park’s e-ticket rides is Journey to the Center of the Earth. The beginning starts out as a tame journey (to the center of the earth, heh) and ends with a thrilling escape from the lava monster. The end is the best part! The other dark ride in this land, 20,000 Leagues Under the Sea, takes guests to the depths of the ocean. We didn’t care for this ride much — although I’m sure our opinion is biased because the narration is all in Japanese and we couldn’t understand any of it.

Mermaid Lagoon is home to the characters from The Little Mermaid. And Triton’s Kingdom is a huge castle that immerses you into another land “under the sea.”

Most of the rides are geared towards kids (we learned this the hard way after an uncomfortable ride on Flounder’s Flying Fish Coaster, lol)…

But we still had a great time exploring like the big kids that we are. 🙂

Another stunning visual treat is the Arabian Coast.

Aladdin is one of my very favorite Disney movies so I absolutely fell in love with this land.

Sindbad’s Storybook Voyage is a charming indoor boat ride that takes you on an adventure with Sindbad and his tiger Chandu who is the cutest ever!

At the back of the park is the Lost River Delta.

This is where Indiana Jones Adventure: Temple of the Crystal Skull is located. I’m almost positive that the ride is an exact replica of the one at Disneyland in Anaheim except that Indy speaks Japanese! I know that makes sense (I don’t expect them to cater to westerners after all) but it threw me off during the ride.

Ride photos are the best. I mean, look at the expression on my face. LOLOL.

Raging Spirits is supposed to be a roller coaster (with a 360-degree loop!) but really, it was just a disappointment. It was WAY too short. There’s no discernible theme. Not worth the time in line (even with a Fast Pass).

C-3PO! Seriously, the greatness of this park lies in all the details. 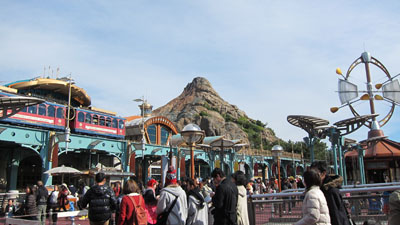 Up next is Port Discovery, which struck me as DisneySea’s take on Tomorrowland.

StormRider is an enjoyable motion simulator ride (like Star Tours) that takes you into the center of a huge storm. There’s a great moment during the ride that really took me by surprise. So good!

Using a trackless system (like Pooh’s Hunny Hunt over at Tokyo Disneyland), Aquatopia is a fun little boat ride that moves and spins you through waterfalls and whirlpools in an obstacle course of sorts.

We could have walked but decided to take the Electric Railway, an elevated trolley, over to the last land — American Waterfront.

There are two themed areas in this land — the first is New York!

It has a great street scene…

And even a large scale recreation of an ocean steam liner, the SS Columbia. There’s a formal table service restaurant on the ship and the rest of it is open for guests to explore. Sadly we never found the time to do so.

Toyville Trolley Park is the latest addition to the land and opened in July 2012. This is where you’ll find the wildly popular Toy Story Mania. Locals make a beeline for this ride at park opening and the standby line reaches 2+ hours almost immediately. Since we have the exact same ride at Disney California Adventure, it wasn’t a priority for us to ride in Tokyo, which is why we chose to tour the park starting with Mysterious Island first. Walking through the park in a counterclockwise direction let us enjoy the rides & attractions unique to Japan with minimal crowds. I highly suggest this plan of attack!

We also have Tower of Terror in California (though not as gorgeous as this one) and while the ride itself is said to be identical, the Japanese version has an entirely different storyline. Instead of the Twilight Zone, the ride revolves around the hotel’s builder, Harrison Hightower, and an idol named Shiriki Utundu that he brought home with him from his travels. There is a ridiculously AWESOME effect during the pre-show that truly amazed me. I still can’t figure out how they did it.

I always get super anxious before this ride but once I’m on, it’s THE BEST EVER. The unexpected and sudden drops are SO FUN! We’re on the right in the middle having a blast!

The other themed area of the American Waterfront is Cape Cod.

So Cape Cod is home to Duffy the Disney Bear. He’s a character that the Disney marketing machine created years ago for Walt Disney World that never took off. It wasn’t until he was brought to the Tokyo parks and given a new backstory (Minnie made him for Mickey to take on a journey at sea) that he developed into a true phenomenon. The Japanese are CRAZY about him — there’s an entire store DEDICATED to him and literally everyone is carrying some sort of Duffy paraphernalia (plush, bags, popcorn buckets, etc). Despite his questionable beginnings, I’m a huge fan (or sucker, hehe). I think he’s adorable!

Thumper! AHHHH! SQUEE. But OMG, the way they handle character greetings in Japan is insane. It’s a free for all. There is no line so you have to be super aggressive to get the character’s attention. It took so long for me to get this picture because I held back to let kids go first until finally Thumper grabbed for my hand. He must have noticed that I had been waiting forever. YAY!

The American Waterfront is by far my favorite land at DisneySea. It’s stunning visually and incredibly detailed. The Oriental Land Company left no expense spared (for those that don’t know, the OLC owns the Tokyo parks and they license the themes & characters from the Walt Disney Company).

When darkness descends on the park, it takes on a different feel — and becomes even more beautiful.

The Venetian Gondolas in the Mediterranean Harbor.

Toy Story Mania! So many lights!

The imposing Tower of Terror.

So in love with the American Waterfront.

And Mickey bids you a good night!

For more pics from our day at Tokyo DisneySea, check our Flickr here.