I got back from Las Vegas on Sunday. And I totally sat at work on Monday doing nothing. Shhh. Don’t tell on me. I was TIRED.

I had a good time. And I’m not even that big of a Vegas person. 😀 Here’s a quick rundown of the weekend…

So my friend (and bridesmaid!) Ruby wanted to surprise her boyfriend Jason (also my good friend and colleague — I used to be his assistant and now he’s my sales rep) with a birthday trip to Vegas with friends. Rob and I arrived on Friday night (after a short delay in Oakland, of course) and after a quick change of clothes, we headed off to the Mandalay Bay to meet up with our friends to surprise the birthday boy. We were supposed to meet outside of the Orchid Lounge, which is where Ruby and Jason were having drinks. As we approached, Ruby happened to be looking in our direction and what did I do — I WAVED. OMG. I’m such a moron. Luckily, Jason was looking down and didn’t see me. Phew. Once all of us were gathered, we walked in and practically jumped all over the poor guy. 😀 After a few hours of talking and drinking (only half an Amaretto Sour for me), we went over to the Rum Jungle for more drinking (not me) and dancing (yay).

Here I am with Ruby and Jason… 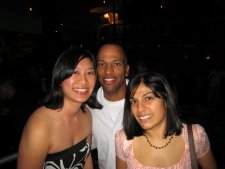 And here’s the group taking shots… 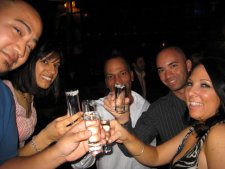 Sadly, the DJ at Rum Jungle was terrible. So there was not much dancing. We finally dispersed at 3am. EEEK. It was rough getting up the next day. I am too old to be staying out that late. :/

Didn’t do much on Saturday (poor Jason had a *little* too much to drink so he was out of commission for most of the day) but I did get to check out the Wynn. I haven’t been to Vegas since it opened a few years back and wow, the lobby and the shopping esplanade are gorgeous. The casino, though, looks just like every other casino on the strip. While we were there, I dragged Rob to the Manolo Blahnik store (later I even dragged Ruby into the Jimmy Choo store at Caesar’s Palace) — all in the name of “research” for my wedding shoes. A girl can dream, right? 😀

We went to Aquanox at the Venetian for dinner. YUM-O. I had the filet mignon at a seafood restaurant. Hee. Afterwards, the guys headed off to the blackjack tables and Ruby and I took advantage of the free drink service (just cokes for me). Aaannnd that was our weekend. We hopped on a flight back to Oakland early on Sunday morning and took a nap as soon as we got home.

In fandom news, has anyone heard/read the casting news for Prison Break season 4? WHAT THE HELL. TV Guide’s Ausiello has an interview with the executive producer if you want to read all about it. I think I might start watching again.