October marks the start of my favorite time of year. Of course there’s my birthday (YAY) but I just love the holidays. I’ve even started listening to holiday music! I’m such a sucker.

As per usual, I’m behind on my blogging. Back in late August, Rob & I took a trip to Canada that included visits to Montreal, Toronto, Niagara Falls & Vancouver. Thought I’d share some highlights of that trip starting with Montreal!

Fri, 8/29
I knew before we arrived that French is the official language in this province but there’s nothing like walking around and not being able to understand anyone speaking around you. It was a little overwhelming but I loved the international vibe!

On our first full day we visited Old Montreal to see the Notre Dame Basilica.

There’s a nominal fee to go inside which includes a short 20 minute guided tour (sadly our tour guide wasn’t that great). Unfortunately for us there was a mass going on in the chapel at the back so it was closed to visitors until the service was finished.

So beautiful! The detail is amazing. I forgot to take a photo but the stained glass windows all along the sides are exquisite.

We walked through the cobblestone streets to the waterfront to take a river cruise on Le Bateux Mouche.

The cruise is 60 minutes and travels along the St. Lawrence River.

We made a big circle in the river so the sights were duplicated once we made a u-turn. In hindsight I wish we had skipped it. You don’t see anything that’s not already visible from land. Rob even slept through most of it!

I did enjoy seeing the view of the city from the water, though.

On the way to the metro, we walked through Place Jacques Cartier which is pretty touristy but fun for browsing the various stalls and people-watching.

For dinner we had reservations at Joe Beef, a restaurant we discovered through the show Mind of a Chef.

This was probably my favorite meal of the trip. Too bad my photos are terrible. We started with raw oysters and a super fresh and tasty tomato salad (they were picked from their garden behind the restaurant!). Then for our mains I had the most amazing lobster spaghetti and Rob had the horse (steak). Everything was absolutely delicious. The only thing I didn’t like is that the menu is written on ONE chalk board and it’s so hard to read because of the dim lighting in the restaurant. Not to mention that it is super annoying to have to stand in the middle of the restaurant while reading the menu. Overall it was still an awesome experience.

Sat, 8/30
I’m a huge Olympics junkie so of course we had to visit the Olympique Parc.

They have an awesome medal podium where you can pose with the rings! LOVE THIS.

Adjacent to the park is the Montreal Botanical Gardens.

I don’t have a green thumb at all but I can certainly appreciate the beauty. My favorites of the thematic gardens were the Alpine garden, Flowery brooks and lilacs, and the Rose garden.

At the Chinese garden, they were installing lanterns which must look pretty spectacular at night.

Dinner that night was at Au Pied de Cochon, a popular restaurant in the Plateau Mont-Royal neighborhood known for its indulgent dishes many of which include foie gras (like their signature Duck in a can which sounded way too rich for us).

It was a good meal but probably a little too rich for our tastes. The unexpected star was the foie gras poutine. We figured we had to have poutine in Montreal since the dish originated in the province so why not take it one step further and add the foie gras. I’m not really a fan of foie gras but this was delicious! Funnily enough we were chatting with our server and he asked where in California we were from — it turned out that he had lived in Irvine for a few months as a cast member in Cirque du Soleil. What a small world!

Bike trip with Fitz & Folwell! We did their Montreal Highlights tour with a group of 8. I have to admit I was super nervous about city bike riding but luckily it was a Sunday so the city was pretty quiet. Plus, there are lots of designated bike lanes and drivers are pretty good to bikers in a group.

Our guide Martin was super awesome — he was a wealth of knowledge and was really good at keeping an eye on everyone. We started out biking along Plateau Mont Royal, went over to McGill University (above), downtown on St. Catherine St, and finally over to the Old Port where we got to see Notre Dame Basilica again.

From there we went over to the Lachine Canal (above) where we were free of cars as we made our way to the Atwater Market for lunch. We had yummy pizza, fruits and good conversation.

After lunch was the part of the tour I was dreading — the Berri Hill. It was just as bad as I thought. I made it about a third of the way (if that) and then had to get off my bike and walk the rest of the way up the hill. Ugghhhh. At least I knew that we would have a quick break for ice cream & sorbet soon after the hill. I guess that was my motivation. LOL. All in all, it was an amazing tour but for me, I think a 2-3 hour bike tour is probably sufficient. Five hours is just a tad too much especially on city streets and cobblestones. I’d still recommend it though as a fun way to see a lot of the city. We took a taxi back to the hotel and just crashed. We could barely move!

A Montreal institution is smoked meats. For dinner I had originally planned for us to head over to Schwartz’s Deli which is the most popular and arguably the best in the city. Unfortunately, it’s not exactly close to downtown. Since we were so tired, we opted to stay close to our hotel and go to Reuben’s Deli. We shared a smoked meats sandwich platter — the meat was flavorful and yummy!

Mon, 9/1
Before heading to the airport for our flight to Toronto, I wanted to visit Mont Royal to see the view of the city (I’m a sucker for scenic viewpoints). 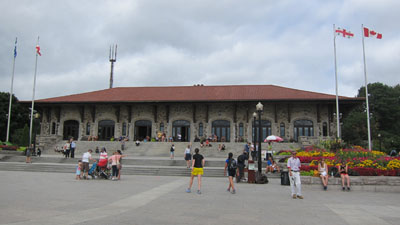 We took the metro to Mont Royal station then took the #11 bus up to the summit. From the bus stop there was still a short walk over to the Chalet and Kondiaronk lookout. 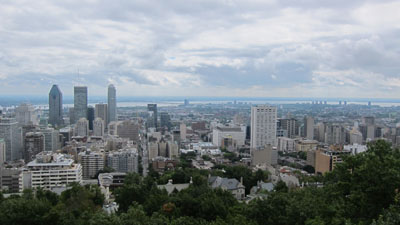 The view was worth the walk! You can see all the way down to the river. Unfortunately it was an overcast yet super humid day so we didn’t spend too much time up there. Plus, we had a plane to catch!

And of course I had to have my own #MTLMOMENTS.