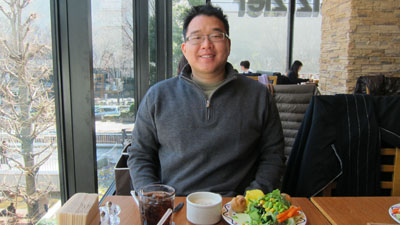 We all did our own thing in the morning (I went shopping at Tokyu Hands – very important!) but we met up for lunch at… SIZZLER! LOL. It was across the street from our hotel so we’d been joking about going at some point during our trip. Sebastian’s birthday lunch was the perfect opportunity! It was better than I remember. Plus, the cheese toast was so NOMMY!

During the planning for our trip, we would randomly get together to discuss things to do. We happened to watch this video where the hosts visit Ishikawa Brewery while sake tasting in Tokyo. Since sake tasting was also on our wishlist, I got in touch with the brewery to set up our own tour of the grounds.

Our tour was at 3pm and since the brewery is about 45 minutes away from Shinjuku, we headed over there right after lunch. 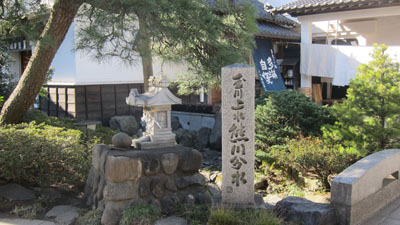 The grounds of the brewery. 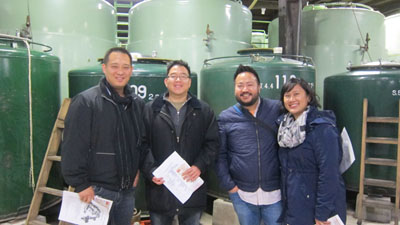 Our complimentary tour started in the storehouse. Oh man, when we walked in, the smell of alcohol was so strong. I don’t even like alcohol but it smelled so good! 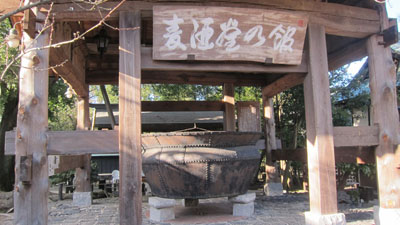 Our guide walked us through the facilities while telling us about the history of the brewery. Above is a cauldron that was used to make beer during the Meiji period. 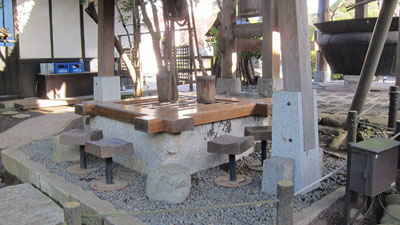 This is the spring water well that runs under the brewery’s sacred tree. Up until 50 years ago, this water was the main source for sake brewing. 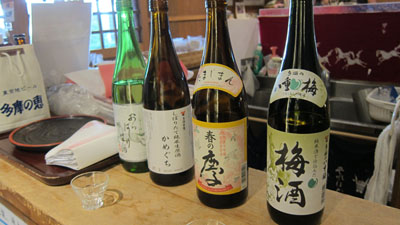 At the end of the tour, our guide took us to the sake cellar where we tasted 4 different varieties of sake. The plum variety was my favorite because it was smooth and incredibly sweet. Yum! 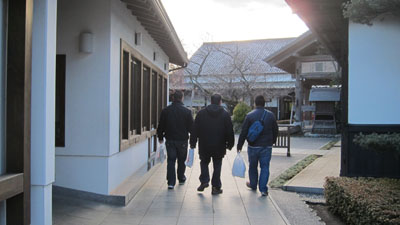 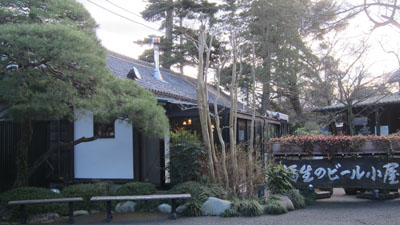 There are two restaurants on the grounds — one Japanese (Zougura) and one Italian (Fussa no Birugoya). We were ready for a snack and since the Japanese restaurant was closed that day, we shared pizza at the Italian restaurant and the boys shared a pitcher of sake. 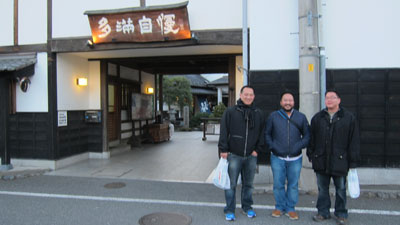 Thanks for your hospitality, Ishikawa Brewery!

We didn’t have any set plans for that night and since we’d been tossing around the idea of going to the Robot Restaurant, we decided to head over to Shinjuku to see if there were tickets for any of that night’s shows (depending on the season, there are 2-4 shows per day). 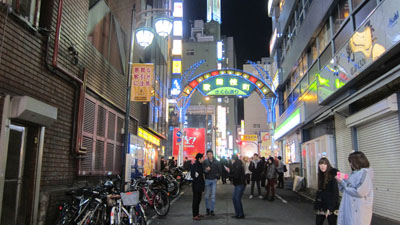 Robot Restaurant is located in the Kabukicho, which is the entertainment and red-light district of Shinjuku. It’s not unsafe but it’s definitely more seedy than pretty much anywhere else we visited in Tokyo. Rob was even propositioned by a pimp (?) who asked him “Sex? Sex?” LOL.

Anyway, we lucked out and got tickets to the next show! 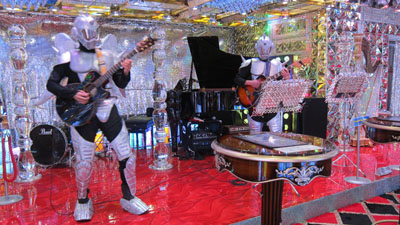 We waited in the lounge where there’s live entertainment and a bar. 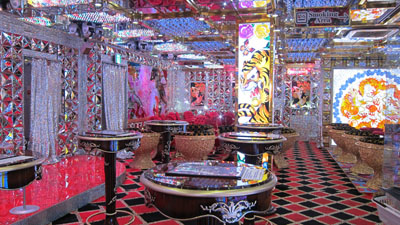 It’s so over the top and insane in there. I loved it! 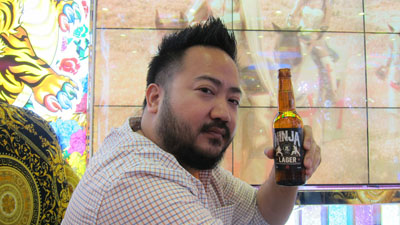 We enjoyed some refreshments before the start of the show. 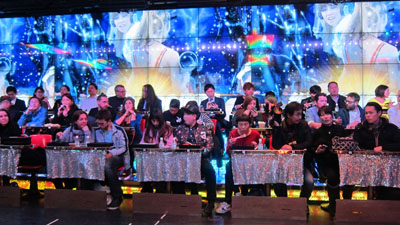 Shortly before show time, we were ushered to the performance area. It was smaller and more intimate than I expected. But that just meant we were much closer to the action. AND we had front row seats! 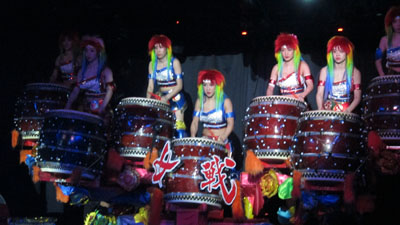 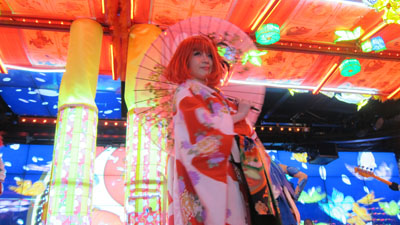 I don’t really know how to describe the show. There’s no linear storyline to speak of. It started out on a serious note with tribal drums and traditional dancing. Then it just proceeded into… insanity & awesomeness. Seriously! 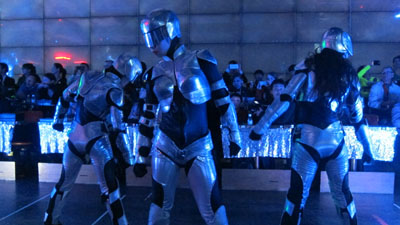 See what I mean?! These dancers look like they came straight out of the movie Tron. 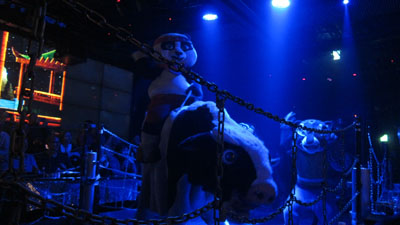 The stagehands put up a chain link fence around the stage for the EPIC battle between giant animals and equally giant robots! I particularly enjoyed this panda. 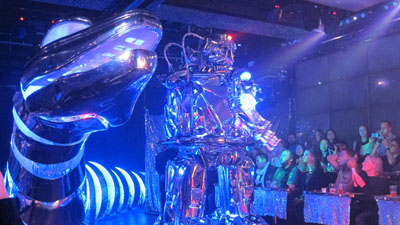 Even more robots came out on stage along with this enormous snake. 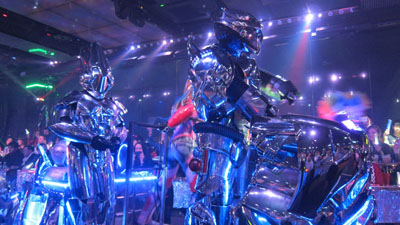 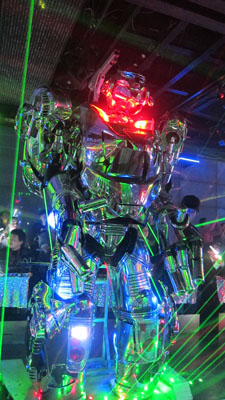 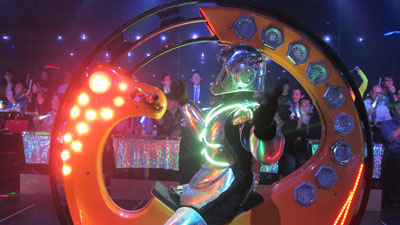 These vehicles reminded me of light cycles (again with the Tron references). 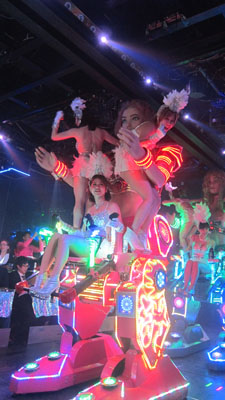 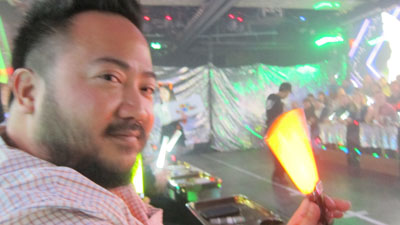 Towards the end of the show, they passed out glow sticks to the audience and the dancers were carried out on these huge fembots.

It was seriously TONS of fun. I smiled and laughed the entire time because it was all so surreal and bizarre. But all in a good way! It’s well worth the admission (about $58 per person) and I’d say it’s a “must do” for any tourist because it manages to capture the quirky side of Japanese culture. I would totally go again! 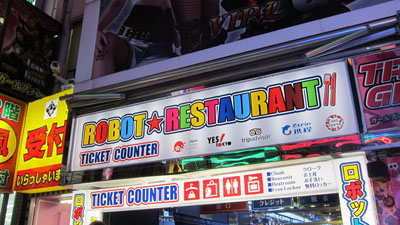 Yay for the Robot Restaurant! It was a spectacular way to spend one of our last nights in Tokyo.