Last year our friend Leah mentioned that she would be traveling to South Korea for work sometime in early 2014. A few of us threw out the idea of tagging along with her and at first I thought it was just a bit of wishful thinking until all of a sudden we were requesting time off and booking flights. !!!

We spent 4.5 days in Seoul this past February which was just enough time to visit the more popular tourist attractions and neighborhoods. English isn’t widely spoken in Seoul at all so we were lucky to be traveling with our friends Rob & Sebastian who acted as our tour guides (they both speak Korean and lived in Seoul for awhile after college) — they not only accompanied us everywhere but they translated for us too. We would have had an extremely hard time getting by without them — so grateful!

Also, the weather is typically in the 40s during this time of the year. I was so scared I would freeze (I’m a Californian, what can I say?) but it wasn’t bad at all. Seriously!

One place I definitely wanted to visit was the Korean demilitarized zone, which is the area that serves as a buffer between North & South Korea. The USO runs a tour that visits various points of interest in the DMZ but most importantly includes a stop within the Joint Security Area where you can actually step foot into North Korea. !!! 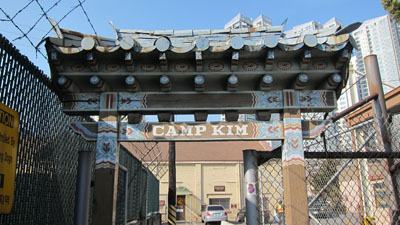 The tour starts at Camp Kim in Seoul where everyone checks in and boards the bus for the drive to the border. 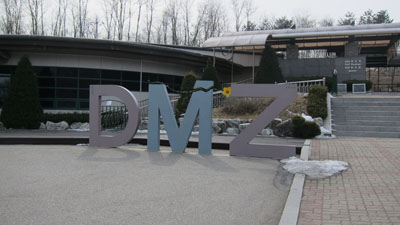 The first stop was the 3rd Infiltration Tunnel, which is one of four known tunnels between North & South Korea (supposedly there are 20+ more that haven’t been found yet). The tunnel was built by the North Koreans in order to launch a surprise attack on Seoul. Their cover story is that they were digging for coal — they even went so far as to paint coal dust along the tunnel walls. Too bad geologically it’s not possible to find coal in this area and dynamite markings were found in the tunnel as well. Tourists can walk a portion of the way to see the barricades that were put up to block tunnel access. We went down to the tunnel but didn’t get very far before we decided to turn around. The space was TIGHT, the ceiling was LOW (thank goodness for the hard hats they made us wear) and it was HOT. Not to mention that on the way back we were faced with a steep incline. OH MAN. THAT WAS THE WORST. Sadly no photos are allowed in the tunnel.

Next up was Dorasan train station, which is the last stop on the rail line before North Korea. 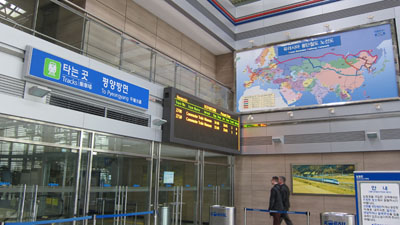 In the past, goods were transported through this station and into the Kaesong region in North Korea. But in 2008, the North Korean government closed the border crossing due to political conflicts. 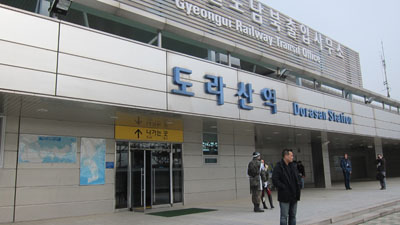 We were allowed to see the tracks after paying a few South Korean won to get a souvenir ticket.

END_OF_DOCUMENT_TOKEN_TO_BE_REPLACED

Kel. 35. Lives in the OC. Graduated from UC Berkeley 2001. Has a *small* obsession with TV. Enjoys chick lit and teen movies. Major shopaholic. Blogging since January 17, 2002.