A few people have asked me how I like my MacBook Pro. Overall, I LOVE IT. Sure I’ve gotten tripped up by having to “quit” applications instead of simply clicking on the red “x” on the window. And yes, I made the novice mistake of not properly installing a new application by failing to “eject” the dmg file.

But those are little things…

I mean, who knew iTunes could load in a few seconds? I didn’t. And who knew I could have more than 2 programs running without slowing down the whole machine? NOT ME. So performance-wise, it’s been pretty freaking amazing. It’s also really really good-looking (is that a quote from Zoolander?) — the aluminum body is sleek yet sturdy and the 17 inch display is crisp and gorgeous.

The best thing is the fantastic deal I got on it since it’s an “old” model (as “old” as a MBP can be when it has a 2.5 GHz processor, 4GB RAM, and 320 gb hard drive). When I was at the Apple store in Costa Mesa last week, I had no idea that a new 17 inch model was going to hit the stores in another week. All they had on display were the old ones. After testing out the computer and pacing around the store for almost an hour, I finally decided to take the plunge. I located a sales associate only to be told that they didn’t have any in stock yet. *sad* I didn’t realize at the time that he thought I was asking about the to-be-released model.

I’m sure Rob detected my sad face because he asked if I wanted to check the Apple store at the Irvine Spectrum. Well, of course I did! Now I was on a mission. I called first so we wouldn’t waste our time and when I asked about the 17 inch MBP, the sales associate said they would be available at the end of the following week. But before I could thank him and hang up, he did the MOST AWESOME THING EVER and told me that the current 17 inch MBP’s they had in store were on promotion for $1599 ($900 off the regular price of $2499!). I asked what time they closed and we headed over there.

After an initial scare with a sales associate who didn’t know about the promotion, I finally found someone who knew what I was talking about and all of a sudden, I was forking over my credit card. All in all, I saved $1100 because I also used my company’s 8% corporate discount. 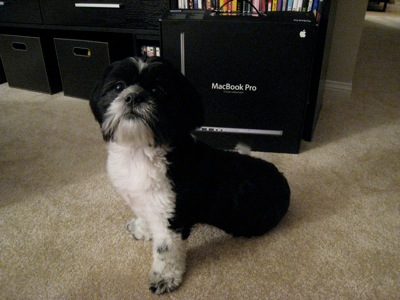 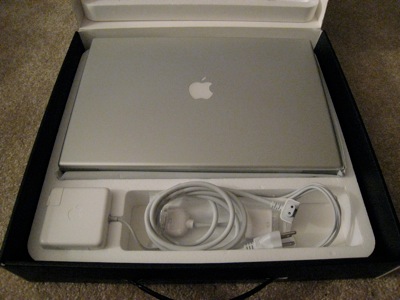 I did it… I officially converted my blog over to WordPress. Phew. There’s still a lot for me to do “behind the scenes” (tag and reformat my old entries, work on the sidebar) but I’ve gotten the installation to a place I feel good about. I also don’t LOVE this theme but it’s not an eyesore or anything like that so it’s fine for now (at least I hope it’s not).

My other big news is that I got a MACBOOK PRO over the weekend! YAYAYAYAY.

I know I haven’t been blogging much but I’m planning a big “life” post soon. Stay tuned.

Last Friday I had this BRIGHT idea to switch my current blogging platform from Movable Type to WordPress. I’ve wanted to do this for awhile now — I haven’t been very happy with MT (rebuilding the site after a layout change takes FOREVER) and wanted the functionality and ease of use that WP can offer.

So things started out well enough — I installed WordPress to a test site and I even managed to convert all my old entries. SCORE!

BUT THEN. This is when I could kick myself. I decided that none of the default WP themes would work for my site and I was too lazy to learn how to create a theme myself so I went tooling around the net for one that I liked. All of a sudden, pop-ups started coming out of nowhere and a freaking toolbar hijacked my browser. NOT COOL. I freaked out, screamed for Rob to help me, and he ran some anti-virus/spyware programs. ARGH. %$#@!*&%$

My laptop’s doing much better (thanks to the hubs) but this little episode has made me want a new laptop even more. Preferably a MacBook. Because it’s pretty (only kidding, kind of). I’ve had my Dell for 6 years now and it’s served me well but I think it’s about time… hmmm.

Anyway, I’m not sure when I’m going to officially switch my blog over to WP. I still haven’t found a theme I like… and I’m not about to go looking for one again. *sigh*

An entry in list form because I’m feeling random…

1. I’ve been thinking about getting a new laptop. And because Apple’s advertising is so damn effective and their products are aesthetically pleasing, I want to try the MacBook. But I’m a little worried about the transition from a PC to a Mac. Anyone have any tips? I probably won’t even be able to take the plunge until after the wedding (when I’ll have money) but hey, it doesn’t hurt to do some wishful thinking. ­¤śø

2. I recently found the Candy Blog. BEST. BLOG. EVER. Right now I’m actually going through the archives and *drooling* over all the yummy candy.

3. I’ve become addicted to paper crafts and rubber stamping. I have no clue how this came about. All I know is that I’m at Paper Source or Michaels about once a week to feed my obsession. I’m even taking a rubber stamping class next Sunday. I guess it’s about time I took up a hobby other than watching TV all the time. Heh. ­¤śĆ

5. Just finished Britney’s performance. Hmm. She seemed incredibly nervous and uncomfortable. ­¤Öü Which makes me sad cause I’m really rooting for her. (What can I say — I’m a huge fan and apologist). She looked great, though. I think I’m neutral on the song… didn’t love it but didn’t hate it, either.

6. I hate the style of this year’s VMAs. What’s with all the different “suites/parties?” They made the whole show so disjointed. Plus, I watch the VMAs for all the performances and I hated how they only showed pieces of them. Blah.

7. Sarah Silverman was awful. And I hated her jokes about Britney’s kids. ­¤Öü

8. Performances I enjoyed… Linkin Park, Alicia Keys, Timbaland/Justin/Nelly Furtado. But my favorite was Chris Brown! I know. He can’t act (see: The OC) but he sure can dance.

9. Poor Vanessa Hudgens (of High School Musical fame) is having a horrible, horrible week. ­¤Öü Her nude photos get leaked on the internet and now there’s talk of her being replaced in the next HSM movie. I hope not — I love her! I know Disney is known for their knee-jerk reactions but I hope they just chalk this up to her being young and stupid.

Hope everyone has a good week ahead!

Kel. 35. Lives in the OC. Graduated from UC Berkeley 2001. Has a *small* obsession with TV. Enjoys chick lit and teen movies. Major shopaholic. Blogging since January 17, 2002.